At the middle of March, the walleye spawn. During this period, which lasts about ten days, a good angler can catch walleyes in the river’s shallow waters or creek beds. That is the end of walleye fishing for a while. The white bass will spawn next, in middle April. They are vulnerable to river fishing the same as the walleye. In May, after the water temperature rises some and the water clears as the lake water level rises, all fish, especially smallmouth bass, become lazy and do not venture into shallow water. However, they do come to the surface to feed on flies and other insects, very early in the morning and late in the evening. That is the time for a fly rod and streamers. A lot of fish are caught that way.

Top water lures work very well on smallmouth and largemouth bass, early in the morning and late in the evening.

Toward the end of May, the lakes are crowded with a lot of traffic, ski boats and skiers, as well a jet skis. When that happens, night fishing is recommended. Florescent black lights and florescent monofilament line are required, along with a lot of mosquito repellent. The lure recommended is the plastic worms that come in a large variety of forms and colors. The fishing
is slower and more relaxing and the fish are deeper, usually from 10 to 25 feet. All lakes can be productively fished with plastic worms. The one most often fished that way in our area is Carter’s Lake, near Ellijay.

In June, July, and August most of the serious anglers quit fishing and wait until the end of September to start fishing again.

There is a misconception that fishing is no good or difficult in the winter time. On the contrary, winter fishing can be rewarding to anglers who seek larger, more sporting fish. The largest Lake Blue Ridge Walleye I ever caught, on January 27, 1992, tipped the scales at 9 pounds. My biggest Largemouth Bass came out of Lake Nottely in December 1967, at 8-1/2 pounds. These are some of the reasons I try to go fishing in winter, every time the weather is bearable (40°+ in December, January, and February).

The four signs for a fisherman who wants to fish in winter are:

The recommended lures for winter are flex spoons jigged on the bottom at the depth of 35-50 feet. This method of fishing is more effective when the lake is being pulled (water is being released from the lake). Doll flies (jigs) or plastic twisters in a variety of colors can be effective in depths of 5-20 feet. Deep running crank baits are very effective, if the water is dingy and a good wind is blowing toward the bank. That is the bank one needs to fish. The same lures are also effective on deep rocky points and banks with cover (fallen trees, etc.), especially after sunset. The use of live minnows is also widespread during the winter months. The minnows are dragged behind the boat, at a very slow speed, with a long line out.

One should invest in some warm insulated underwear, heavy pants and shirts, insulated overalls, and boots. Good quality rainwear (Gore-Tex) is also recommended.

You can catch walleye, smallmouth bass, largemouth bass, and yellow perch in Lake Blue Ridge during the winter months. 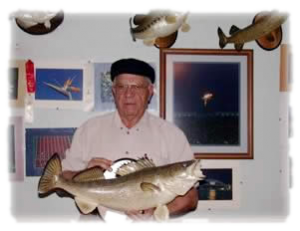 Takis Gaitanoglou in front of his trophy wall at the Fannin Inn (now closed). Takis was born in Greece and has written a book on his experiences during the German occupation of Athens. He’s an expert on local lake fishing who first fished Lake Blue Ridge in 1963. You won’t find better advice anywhere, because Takis goes fishing more than anyone else I know. He’s out there almost every day, except for the dog days of summer. Please understand, Takis is a fisherman, not a guide.