It’s continued rainy and unseasonably warm. We’ve had about 78-82 on the porch in the afternoon, but it’s been a lot hotter down in the valley and in town.

Last Friday, we had a thunderstorm like we haven’t had for some time. The sound effects were amazing, and they went on for a long time. I happen to love that, so I enjoyed every minute of it. I hope you were up Friday evening to enjoy it, too. 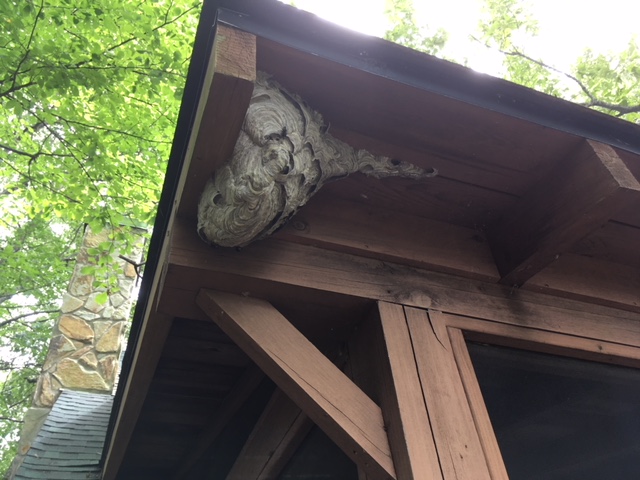 Unfortunately, it damaged the huge wasp nest that was built under the overhang of one corner of my front porch, and they just went nuts. These are the large, paper-like grey nests of the bald headed wasp/hornet, which is in the yellow jacket family. Like yellow jackets, they aren’t aggressive away from the nest, but they’re incredibly aggressive in defending it. We’re both Georgia Master Naturalists, and we don’t like to kill pollinators, even though these wasps are not hairy – “bald” – and so don’t make great pollinators. And that was working out fine, until the nest got damaged. There were many angry swarms over the next two days, and it wasn’t safe to let the dog out, or to go out that door ourselves. And … those are the shortest steps, and the only ones that our old dog can really use. Given that it was clear that the nest had gotten so big that it was going to get damaged repeatedly in storms, they had to go. My learning is to deal with them early, before the colony gets too big, if they are anywhere near a route we use.

We visited the Blue Ridge Brewery recently, which is now on it’s third owners. The space hasn’t changed much, nor has the kitchen. The chef has now been there ten years, and the menu has changed a bit, but not a great deal. Aside from St. Bernardus, the only beers on draft were the locally brewed ones, along with some “collaborations” with the local brewers. That’s Grumpy Old Men, Fannin Brewing, and Buck Bald Brewery. (I’ve seen the Copperhill Brewery kegs coming out of Grumpy Old Men, so I don’t think they’re actually brewing. It seems to be a “contract beer.”) So that’s a change in the business plan, as far as the beer is concerned. They’re now open every day but Tuesday, although they don’t open until 4:00 on Monday.