Snow Again, Roads May Be Hazardous

We got a light dusting of snow late last night. This time, the temperature was low – it’s 20 on the porch this morning – and it stuck to the roads. The county has announced a two hour delay in opening this morning, and the schools have probably either done the same or called off school entirely. 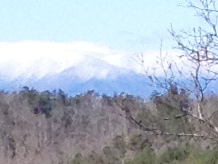 So … it’s cold, especially with the wind. On the other hand, it seems to have snowed pretty good on the higher peaks in the Cohuttas, and the Big Frog and Hemptop are shining in the sun.

This entry was posted in Clyde's Weekly Column, News. Bookmark the permalink.